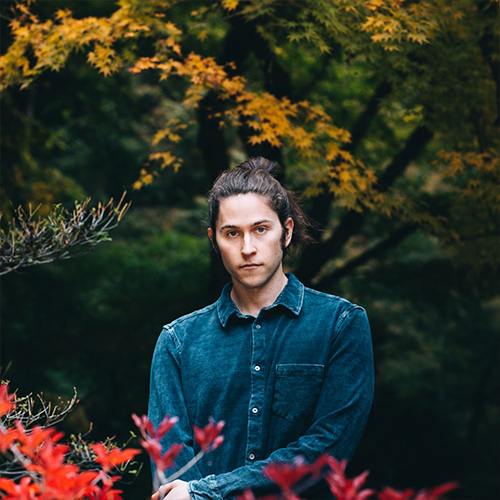 Massachusetts-native artist Big Wild just released “Who Do You Believe”, a brand new single.. and the urgent question that producer, songwriter and vocalist Jackson Stell poses to his listeners ahead of the 2020 US election.

Through an enthralling arrangement of arpeggiated synths, undulating guitar, rising walls of bass, drums and hypnotic vocals, “shouting at the screen”, Big Wild captures the hysteria of false narratives, misinformation and biased agendas disseminated by mass media during an unparalleled, divisive point in history. In both the song and its striking music video, Stell envisions a future in which we leave blind faith behind and build a culture driven by individual critical thought, bereft of propagated falsehoods and indoctrination.

Watch 'Who Do You Believe' (Official Video):

To know a bit more about ‘WDYB’ – or his first new single since ‘Touch’ – we took time to ask a few questions to Jackson.. Music, inspirations and more, you should take a look behind!

Hey Jackson, thanks for your time! Let’s begin with yourself, can you tell us a bit more about Big Wild?

Howdy! I make music, I’ve been obsessed with it since I was a kid. I got hooked producing beats, and it’s since evolved into Big Wild. I learn about the world through music and the places it takes me. I enjoy singing and songwriting too. I live in Portland, Oregon.

You’ve made a great impression with ‘Touch’, which gets a range of Remixes! What’s your recipe to cook these treats? Any inspirations?

When songwriting, I usually put together some chords, drums, and melodies that sound interesting to me in the moment. Once I get that initial bit of inspiration out, I move on to lyrics and what I feel fits the music. I make sure to reference either a feeling or event I’ve experienced myself so that what I write about is honest. Musically, ‘Touch’ was inspired by old western spaghetti films meets disco. Writing this out and picturing a bunch of cowboys hitting up the local discotheque is hilarious…but it worked! There was a sense of lonesomeness and distance in the sounds of the song, which reminded me of times on my recent tour when I was away from my fiancé (now wife). That yearning can become almost tortuous and drive me mad. I dove deep into that emotion and out came ‘Touch’.

Great news for your fans, you’re back now with ‘Who Do You Believe’ – a mesmerizing new single! Maybe do you have an anecdote about this one?

‘Who Do You Believe’ is my picture of what life is like in our society right now, but with a glimpse of hope that we can find some basic, common ground from which to build some form of unity. It was important to release the song with the music video to visualize the different components of the song like the media, the people reacting to information and “news”, and the powerful voices and commentators who seek to divide us. Both the single and the video helped me channel much of my frustration and anxiety with the current situation. All I can hope for at this point is that people vote!

Back to your inspirations, any artist you would love to work with?

There are many people I would love to work with. Tame Impala, Amine, Jim-E Stack, Empire of the Sun… but I’m really happy with the people I work with now in the live band and my wife, who helps me conceptualize a lot.

What are next month’s highlights for you, any releases ahead?

No releases planned, but we have a really great merch item coming out for the new single. All made in Portland. Other than that, I’m spending as much time as I can in the studio working on new music. Also taking care of plants 🙂

Last but not least, what single night out has been the most memorable for you as a performer? And as an attendee?

I’ve been lucky to have many great nights on stage, but my favorite show was Red Rocks 2019. We worked so hard to put together a one-of-a-kind show and it was an amazing experience. Playing that kind of show to a sold out crowd in a beautiful venue is almost every performer’s dream. My favorite moment as an attendee was watching Anderson .Paak play a day time slot at this awesome festival in the mountains of Colorado. It was the perfect temperature outside and he was really feeling on stage. I’ve never been so locked into a show and I felt lifted, euphoric, and invincible all at once. I remember that show vividly because it’s what I want to achieve with my own shows.