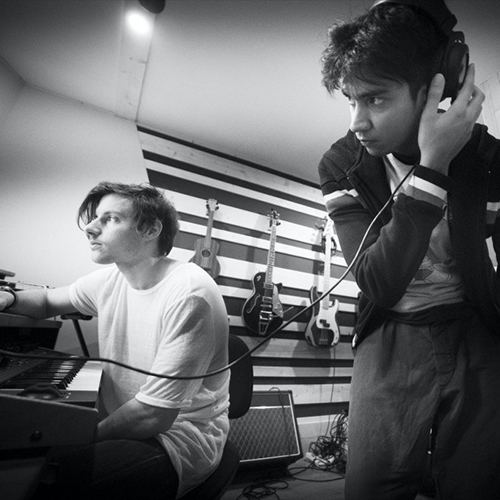 Rising French producer Møme and prolific L.A.-based Canadian Ricky Ducati (Midnight to Monaco) team up once again to deliver a sophisticated slice of feel good summer pop with the arrival of ‘Got It Made’, lifted from the duo’s forthcoming debut album ‘Flashback FM’ due 2021. Drawing on a myriad on influences from disco, soul, RnB and pop, ‘Got It Made’ is an homage to the past, a glorious kaleidoscopic trip back in time through the halcyon musical lineage of the 70’s, 80’s and 90’s.

Striking again, Ducati already featured on Møme’s 2018 hit ‘Sail Away’ — and now the pair’s symbiotic chemistry is really hard to ignore. To know a bit more about what’s behind ‘Got It Made’ and more, this friendship, Sidekick Music had the chance to ask a few questions to Ricky and Jeremy. Creative process, future plans and more, our full Interview is just below!

Hey guys, thanks for your time! Firstly, could you introduce yourselves in a few words?

Jeremy : I’m Jeremy Souillart and I’m a music producer from Nice, France. I started my career 6 years ago, as Møme.

Ricky : I’m Ricky Ducati, songwriter and vocalist from Edmonton, Alberta, Canada and I’ve lived and worked in LA for the last 4 years.

You’ve just released ‘Got It Made’ recently, what a gem! What’s the story behind this collaboration?

J : Ricky and I met each other online (Soundcloud) back in 2015. After the release of our first rework « Alive », he came to visit me in Paris and performed at one of my shows. I personally got a lot of inspiration thanks to Ricky, specially after my song « Aloha » and when I was thinking about my upcoming tracks. End of 2018 we released « Sail away »  which became a success, and finally decided to make a full album together. This new record kept us highly motivated and is the reason why we do music everyday.

Also, what’s your creative process for making music, as a producer/as a singer?  Do you have some tips to share?

J : I always imagine film footages when I’m making music. I need to visualise a scene before going into notes and rhythms. Also, as a producer I try to really communication with the people I work with to be sure we are on the same page. And when I get the right « feeling », I go ahead, no matter what!

R : For writing, it’s usually based from a melody that comes to me and I’ll start arranging/building the song around that initial idea. For singing I usually have the sounds I want to hear and try to construct lyrics that fit those sounds. I am very particular with my vocals so I spend a lot of time editing them.

We’ve just picked your « Daft Punk-esque » music video as well, could you share an anecdote about it?

J : Yeah, this is a no human kind of social distancing video, due to the pandemic and we are very happy with the final result. We were supposed to meet up with Ricky and film in LA last March, but US closed its borders few days before my flight. So we decided to work with Paume, a very cool Parisian agency, led by involved and talented young creators who love music. Ricky and I always loved the Daft-punk aesthetic as well as the French Touch vibe (Fred Falke, Modjo to name a few). That was an additional thing we had in common, Ricky and I.

Watch 'Got It Made' — Official Video :

Now that you have unveiled this new single, what are next month’s highlights for both of you? Any releases ahead?

J : A lot! I can’t wait to release the next singles, then the full album. We exactly knew the direction we wanted to take and now, we’re very proud of the consistency of the project and the final result. Hope you’ll get the modjo we got!

Finally, can you share five records that you can’t get enough of right now?